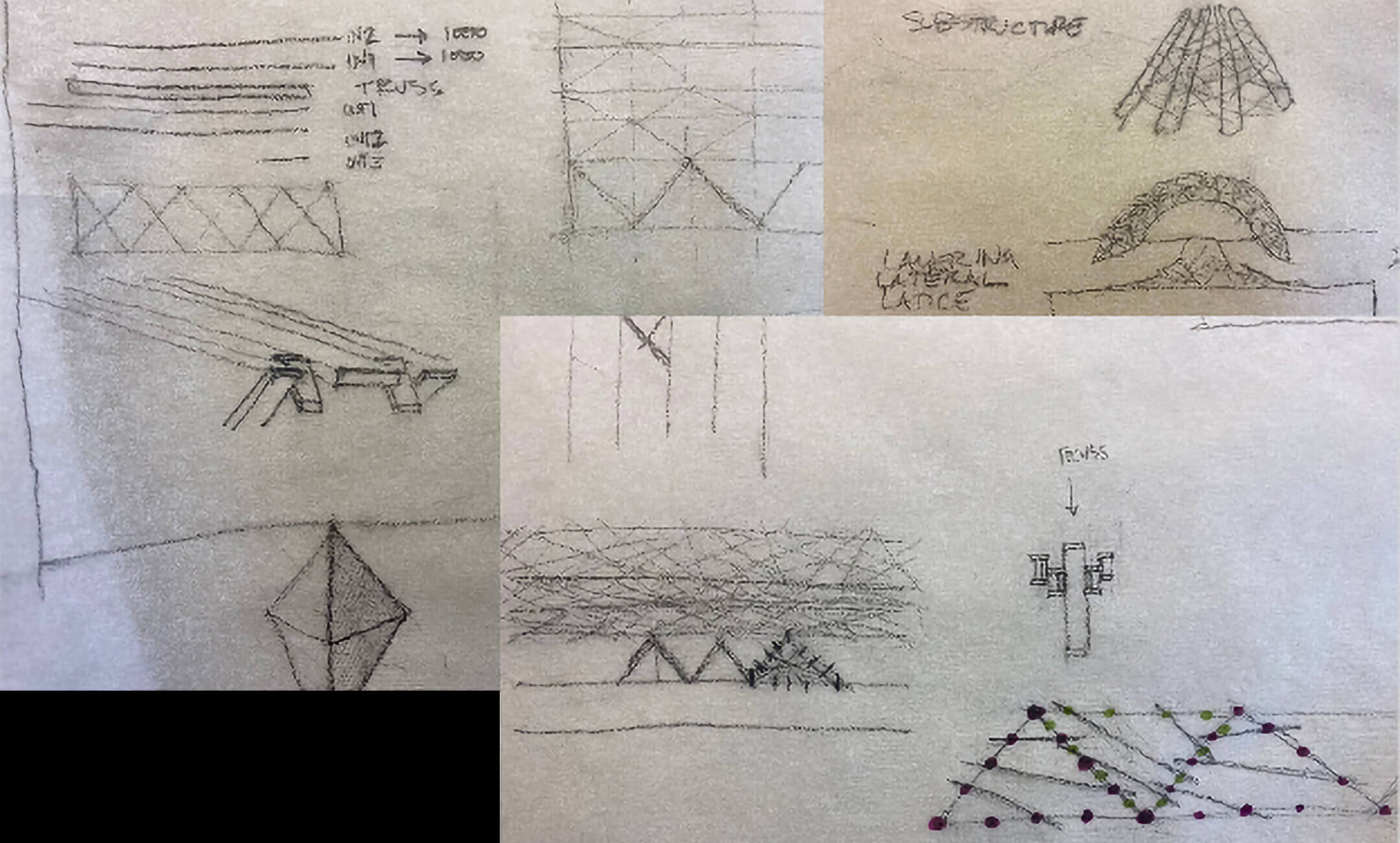 The values and aspirations of a society are said to be reflected in its architecture. Upon closer inspection, one discovers that architecture conveys information and tells stories through its geometry, materials, and spaces. These stories not only embed the building physically into its place, but also in the imaginations of the people that use it.

Conceptualized through extensive public and client engagement, Ādisōke, the Ottawa Public Library (OPL) – Library and Archives Canada (LAC) Joint Facility, tells the story of Ottawa’s rich history and landscape. Its curvilinear roof is reminiscent of the Ottawa River. Its geometric language of peaks echoes the vocabulary used by large public and civic buildings of the City. The striated stone-clad exterior evokes the nearby escarpment, of which contained within is our geologic past. The use of wood not only radiates warmth and welcome, but also draws memories from our nation’s early industries. These elements work in synergy to bring people together to cultivate a place to learn, connect, and create.

The surrounding site for Ādisōke has a long history of convergence: with nearby Chaudière Falls as a significant site that hosted Indigenous gatherings among local and visiting nations; to the height of the timber trade, where logs were sent floating down the Ottawa River and assembled into large timber rafts and sometimes accumulated into log jams; to its current use as the capital of Canada.

This story of convergence is told throughout Ādisōke not only through the large scale expressions of its exterior forms and landscaping, but also through the small scaled wood features of its interior, where our design team assembled a mass of disparate elements and crafted them into cohesive forms that define and give identity to important interior spaces. 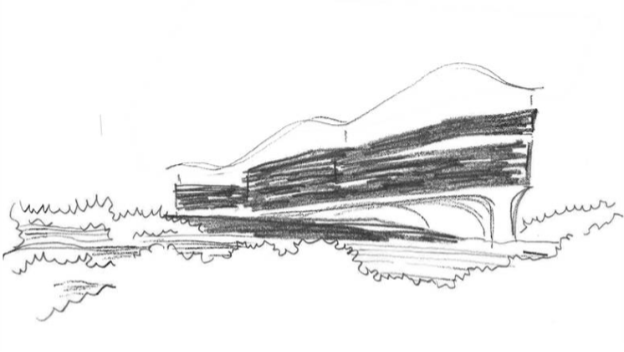 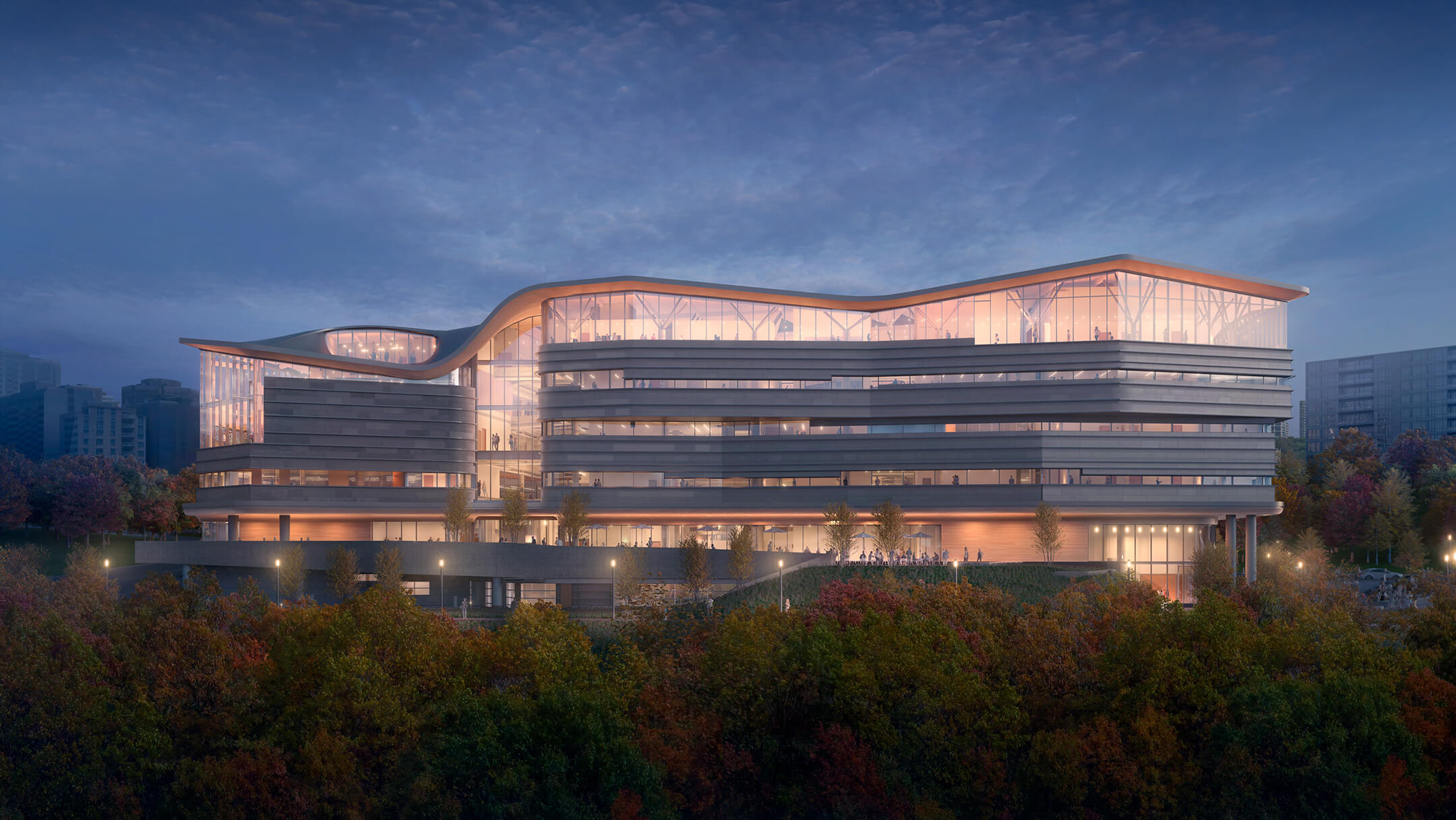 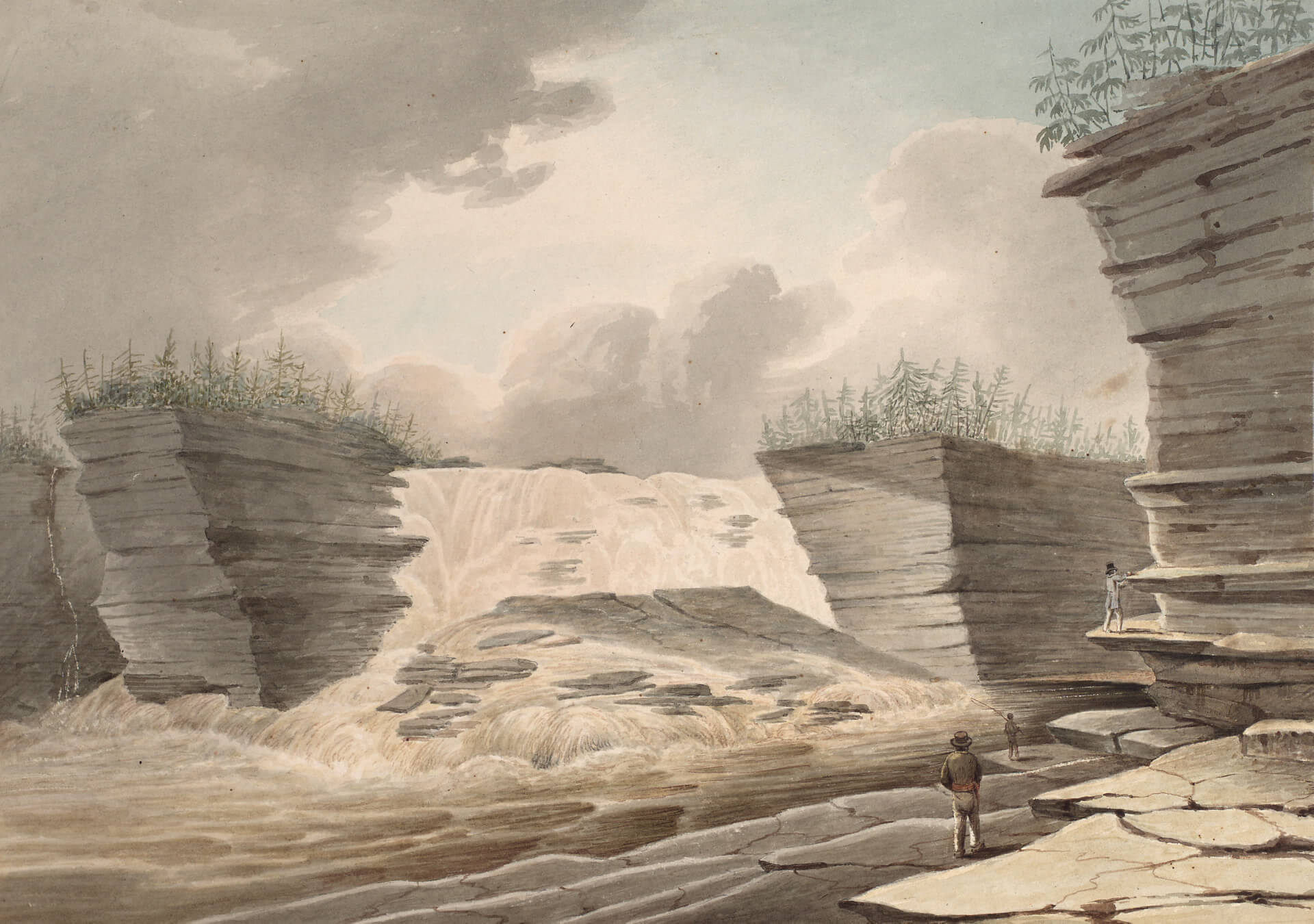 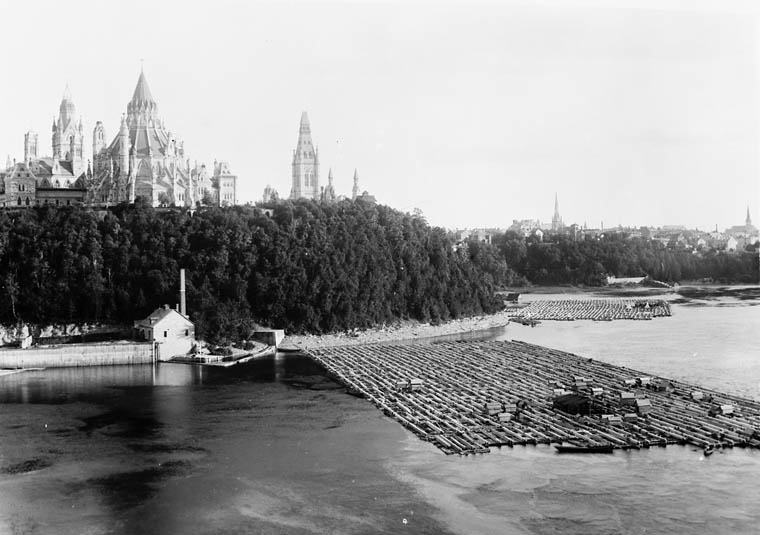 In the summer of 2020 the client group had acquired a supply of reclaimed ash wood from another project – pallets full of lumber that were felled in the Ottawa area due to the emerald ash borer beetle and have been milled and kept in storage, each measuring 5 feet long and 1×3 inches in section. In close collaboration with OPL and LAC, our design team identified two key locations in the building, where flows of people are concentrated, to create unique architectural features using these reclaimed ash pieces that both distinctly identify and unite the two facilities. Acting as anchors to mark the interior thresholds of the two organizations are the LAC Treasures Gallery and the OPL Chandelier.

Our team began the design process of these two features by continuing this story of convergence at a human scale. With the reclaimed ash wood in mind we explored forms that synthesized many small pieces to create two new cohesive focal points. On the Albert Street side of the Town Hall, measuring 11m x 5m in plan and reaching 4m high, the LAC Treasures Gallery wall wraps a room that publicly displays a rotating line up of rare and historic Canadian artifacts. At the ravine side of the Town Hall, hovering 4m over the library express entrance and measuring 7m x 15m in plan, the OPL Chandelier gently arcs around the glass elevator core stretching its arms invitingly on each side.

The initial design studies used repeatable modules that acted as typical building blocks to construct the Treasures Gallery walls and OPL Chandelier. This approach produced iterations that would simplify documentation and construction but appeared aesthetically static and rigid. We realised further design studies aspiring for an organic aesthetic more appropriately suited the identity of the building.

One of the major inspirations came out of our research about the history of the fur trade – a significant part of Canada’s origins – specifically about beaver dams and lodges. Beaver dams constrict the flow of water and allows it to accumulate and create habitats for small fish amphibians and birds. Several species of mammals also use dams as a bridge to cross from one side to the other. Beyond its ecological benefit, the building of a beaver dam or lodge has a similar methodology of assembling many pieces into a single emergent whole, where the furry architect would start with piling larger pieces of wood that act as the primary structure and then subsequently weaving in layer upon layer of smaller pieces – each interwoven and overlapping piece further reinforcing the whole structure. 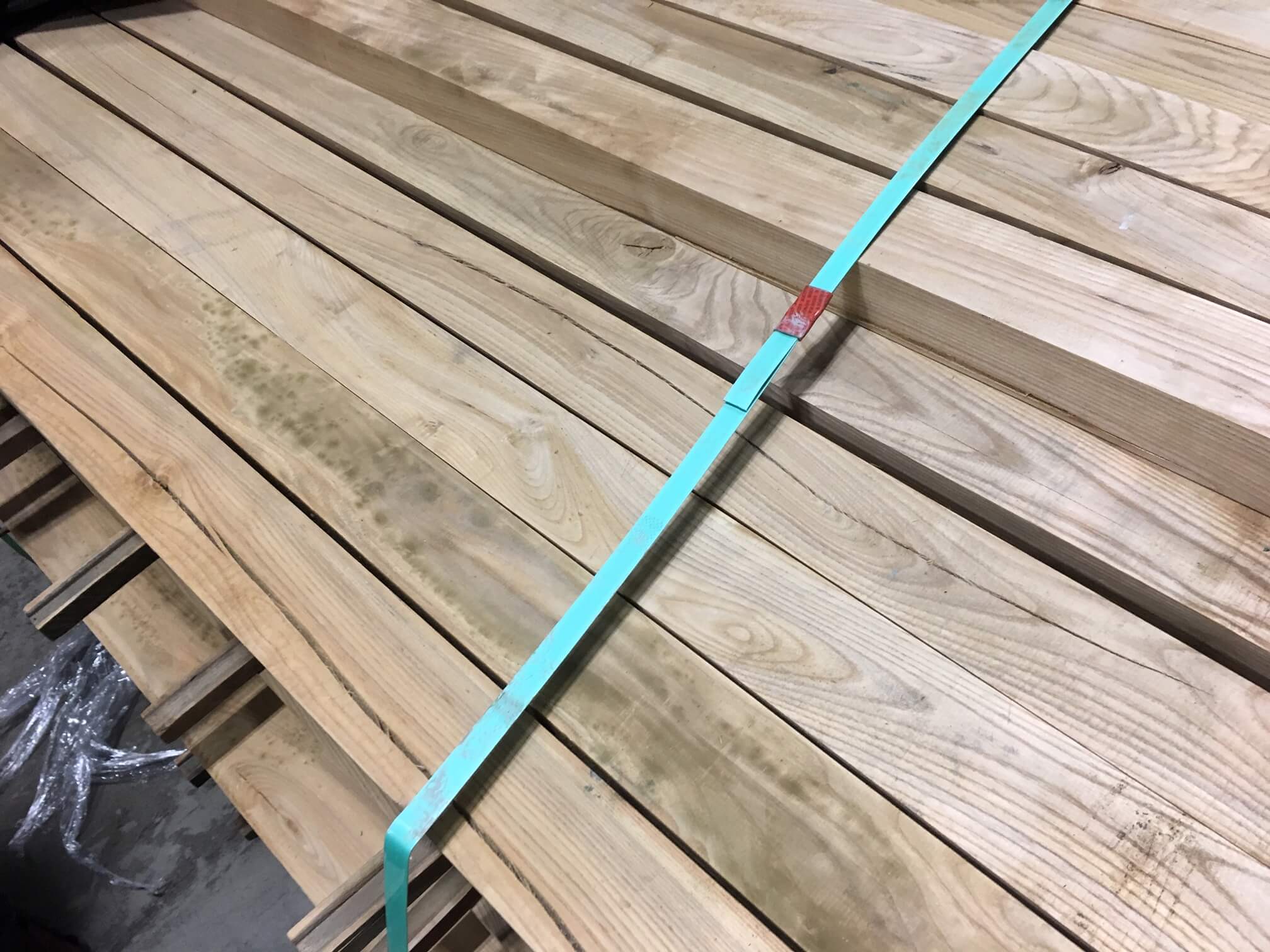 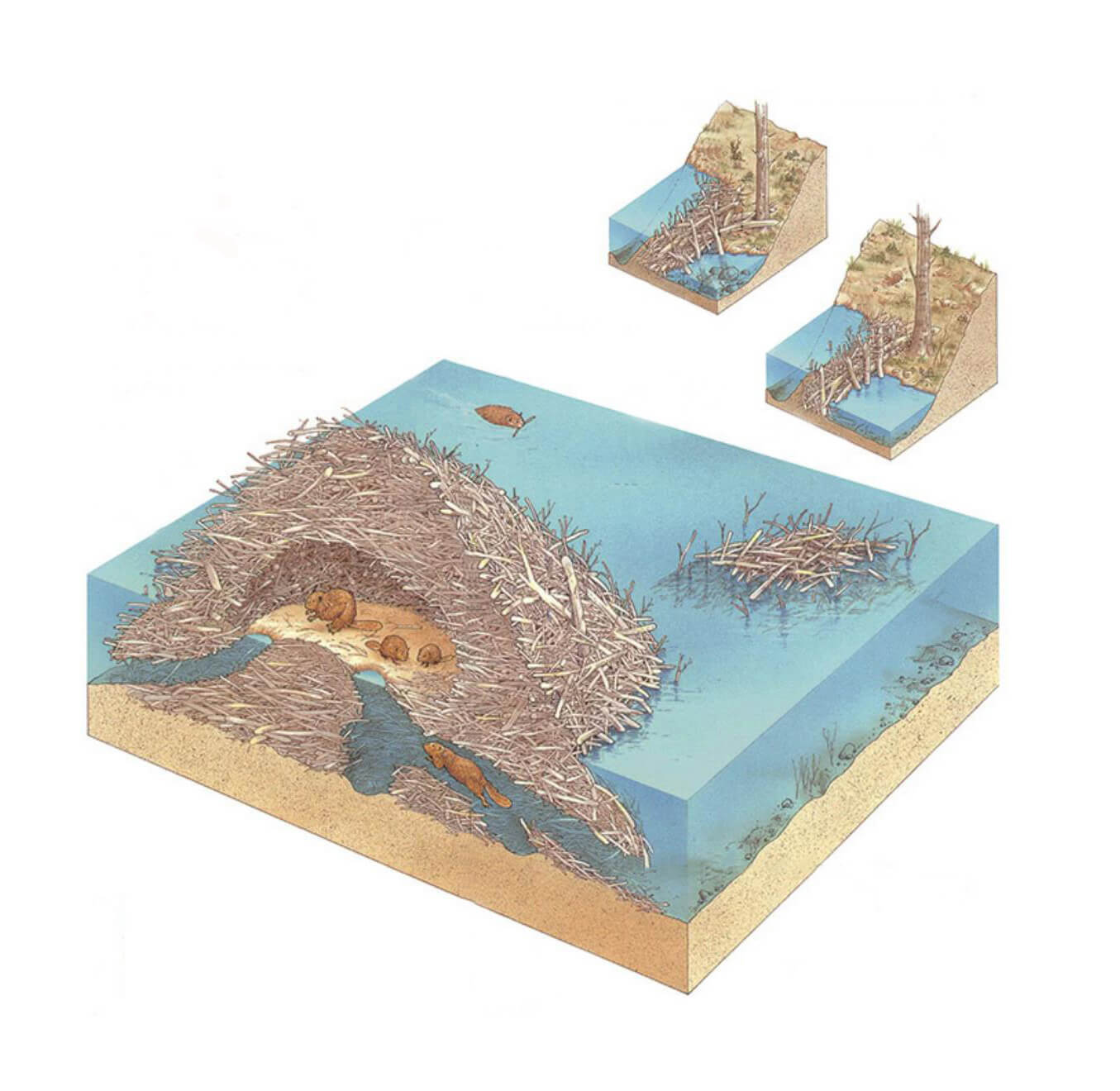 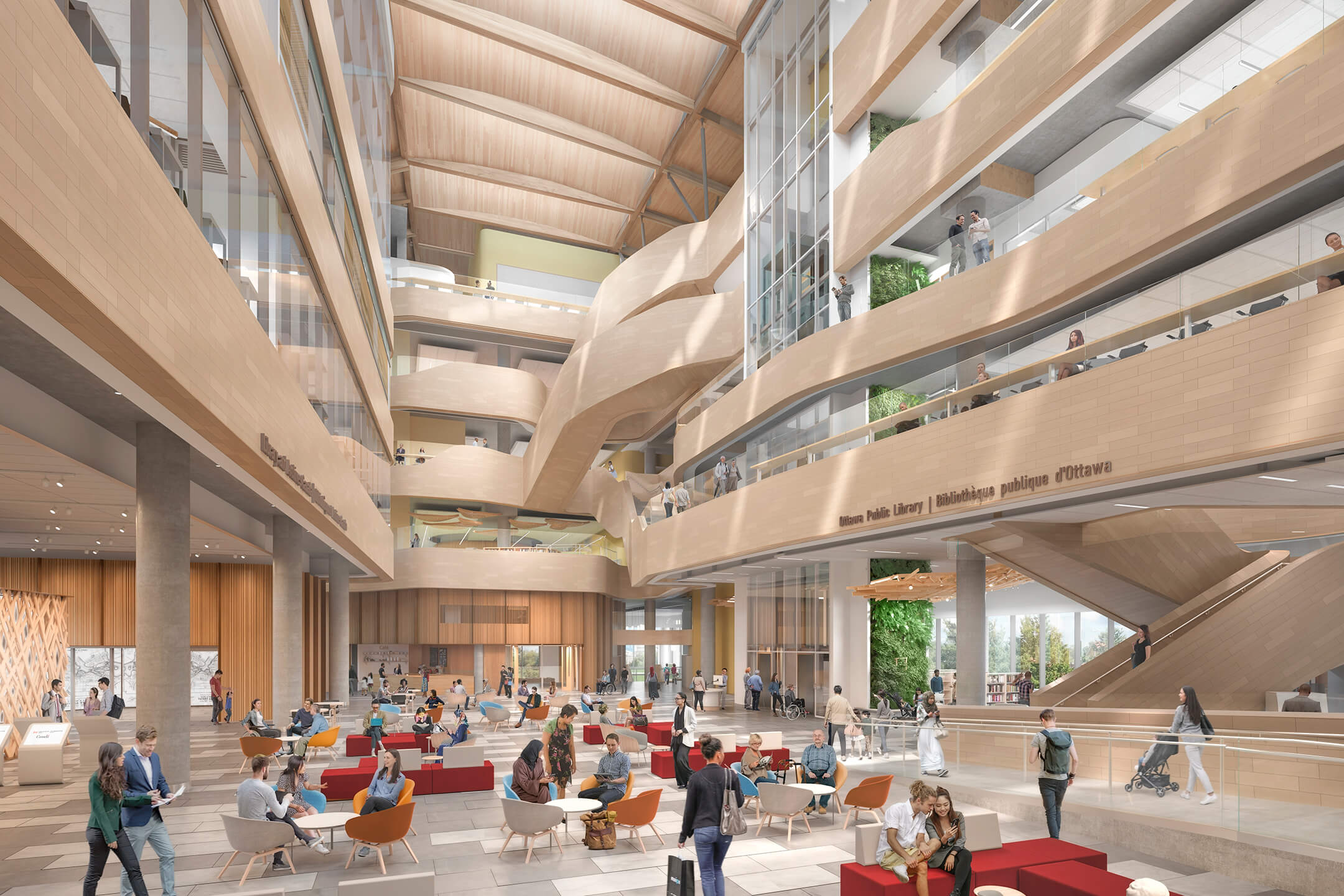 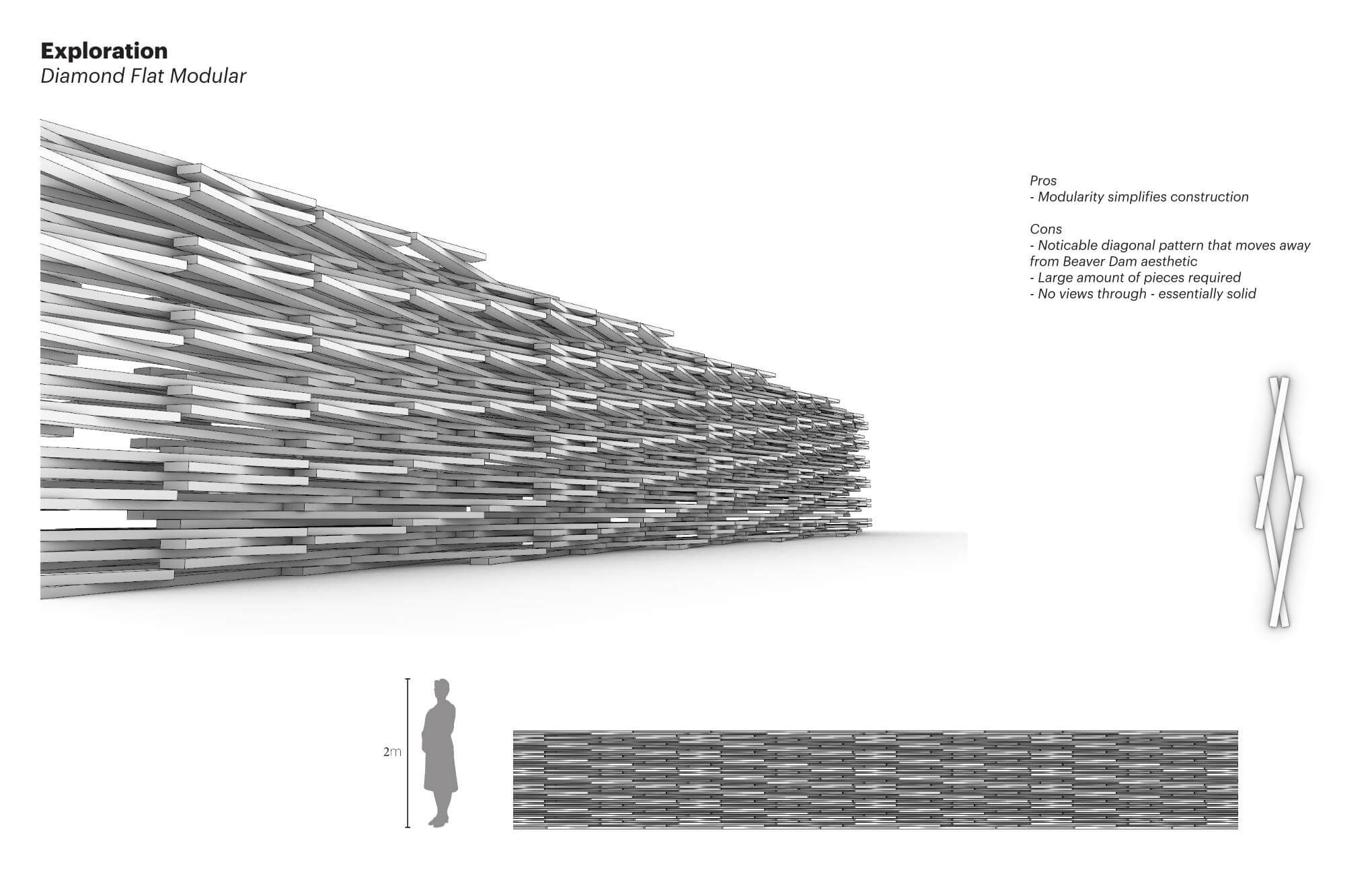 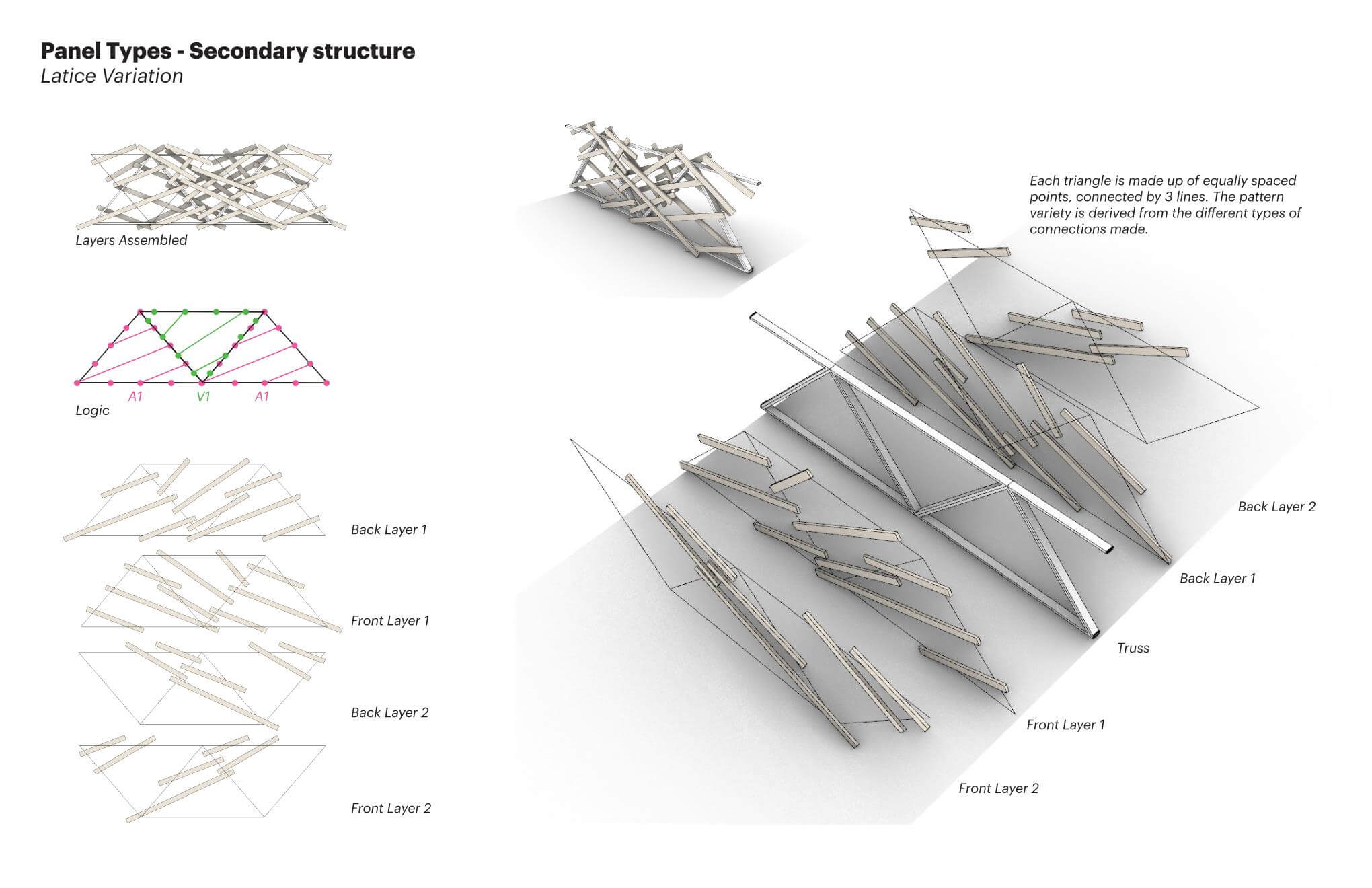 Mimicking this method allowed us to explore more dynamic and organic patterns, using layers of diagonally interlocked wood – a modified diagrid. Both LAC Treasures Gallery wall and OPL Chandelier have the following common elements: a structural steel frame bolted onto concrete and multiple layers of diagonally notched and pinned ash wood – the pattern of each layer becoming less dense the further it is from the structural frame.

Hand sketches allowed us to quickly test if the approach of layering was feasible, and then used the computer to further study the details of the geometry. By using visual programming and 3D modeling, we were able to quickly test out different ways to converge the reclaimed ash wood pieces. The approach started with smaller modular units that employed what we call the “connect-the-dots” approach but quickly evolved into doing away with modularity altogether and scaling up the pattern to the whole wall and chandelier. 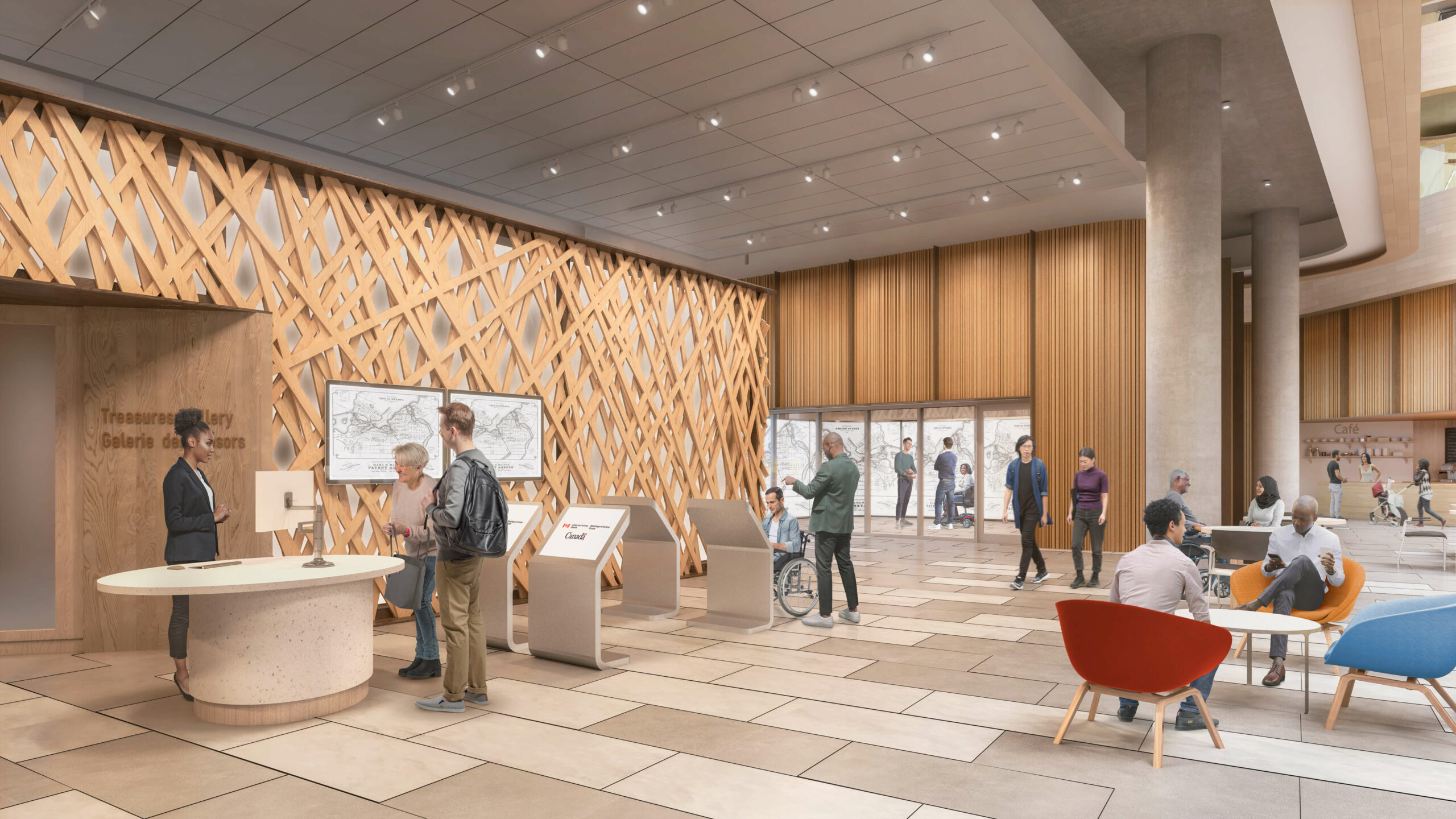 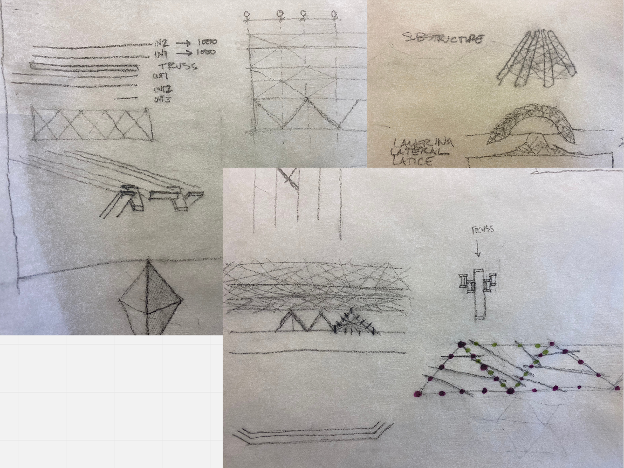 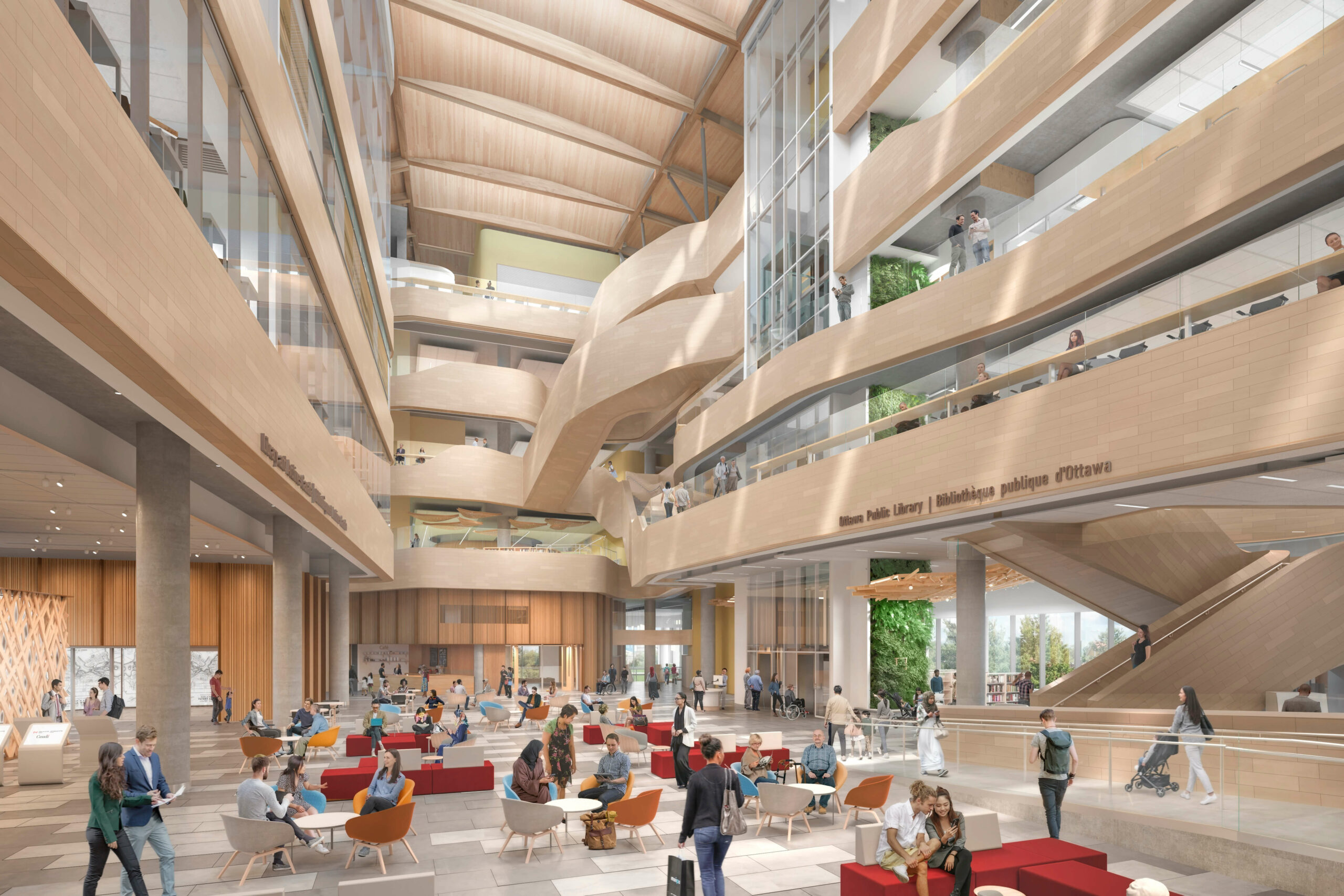 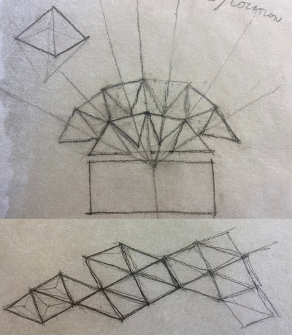 The “connect-the-dots” approach relies on an invisible grid made from a regular pattern where the final irregular pattern emerges from. The grid intersections act as the dots from which lines representing the segments of ash wood start and end. The density of each layer directly corresponds to the amount of connections needed for each piece to be structurally integrated – the closer a layer is to the primary structure, the denser the pattern.

Depending on the required integration of lighting elements, acoustics considerations, and access to mechanical equipment, visual programming and digital modeling allowed for the flexibility to adjust the overall form of the wall and chandelier, the density of the pattern, and the amount, orientation, and colour of the wood.

Evident in the design of the large scale forms to the small scale features, Ādisōke demonstrates the significance of Ottawa’s history and landscape through the stories it tells.