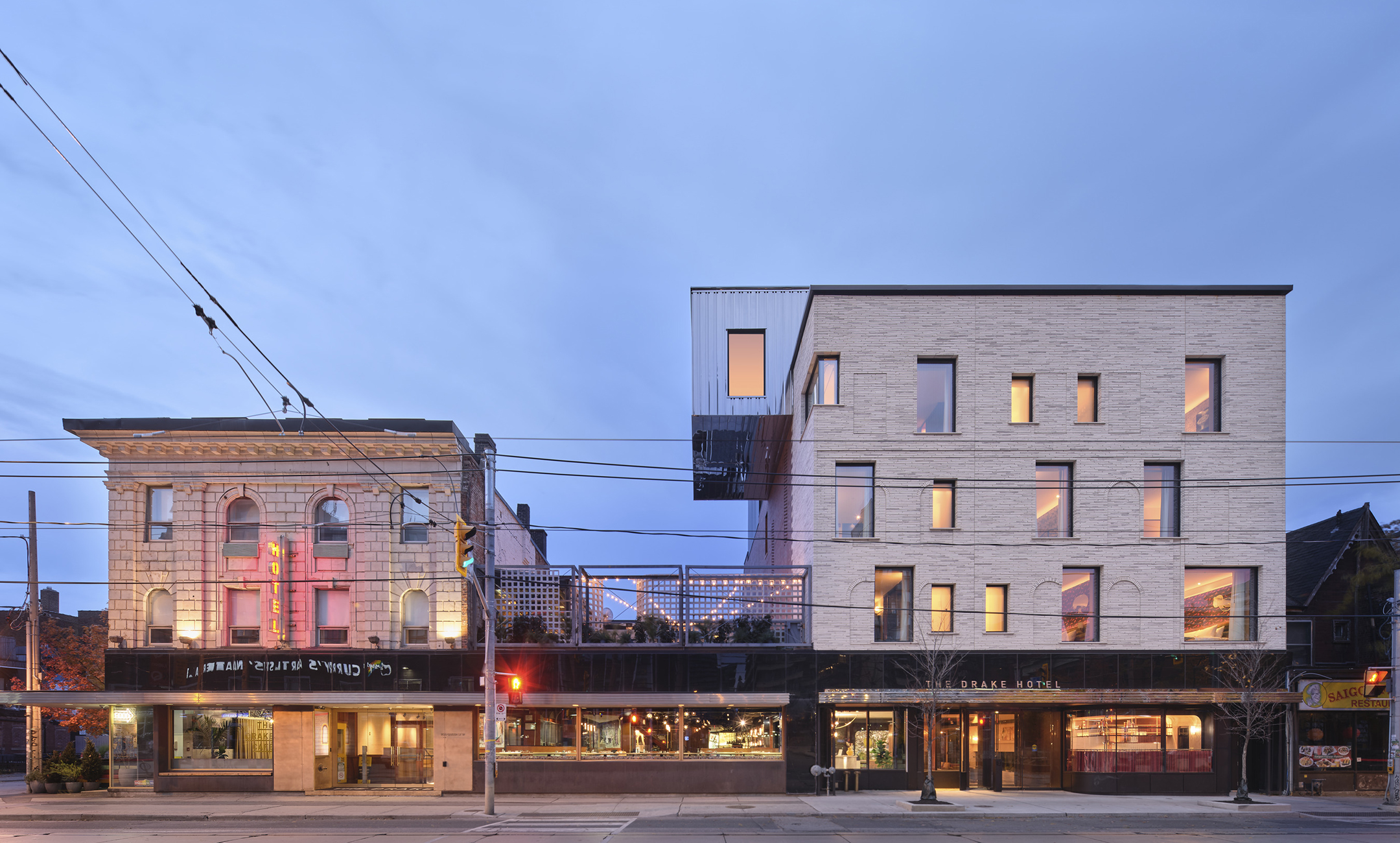 Toronto, Ontario, Canada, December 1, 2021 – Diamond Schmitt has completed the expansion of the independent Drake Hotel in the Queen West neighbourhood of Toronto, Canada. A boutique hotel and arts destination for locals and visitors alike, the hotel is known for its curated program of site-specific art installations, popular rooftop Sky Yard, and groundbreaking performances in the Drake Underground music venue. Diamond Schmitt’s expansion visually connects to the cultural history of Queen West Street while providing contemporary new spaces for presenting visual and performing arts programming to the public, and also tripling the number of hotel rooms available for hosting guests.

Diamond Schmitt’s design expands The Drake eastward along Queen Street West with a welcoming lobby, 32 new hotel rooms, a Rooftop Suite, and terrace. Set back from the façade by an enormous terrace, the Rooftop Suite cantilevers over the Sky Yard to create a dramatic presence. A mid-block open air courtyard brings natural light to the bay windows of hotel rooms on five floors, achieving visual privacy using a fractal geometry. The new five-story building transforms two adjacent lots into a contemporary extension that connects to the existing hotel through the new ground floor main lobby. The lobby’s terrazzo floor in the modern wing echoes the previous flooring on the site and welcomes visitors to the custom, site-responsive artworks curated through the Drake’s renowned art program. Creative concepting of interior spaces are by DesignAgency in collaboration with John Tong and The Drake’s in-house design team.

“Having lived in Queen West for many years, it was an honour and a delight to lead this transformative project,” said Don Schmitt, principal at Diamond Schmitt. “The architectural character of this neighbourhood is such an intrinsic aspect of this community that we took extreme care to ensure the design of the expansion exhibited the same visual integrity of the historic facades around it. The Drake Hotel’s unique features—distinguished by its art program—allowed us to explore exciting ways of integrating that character into the design of the building itself.”