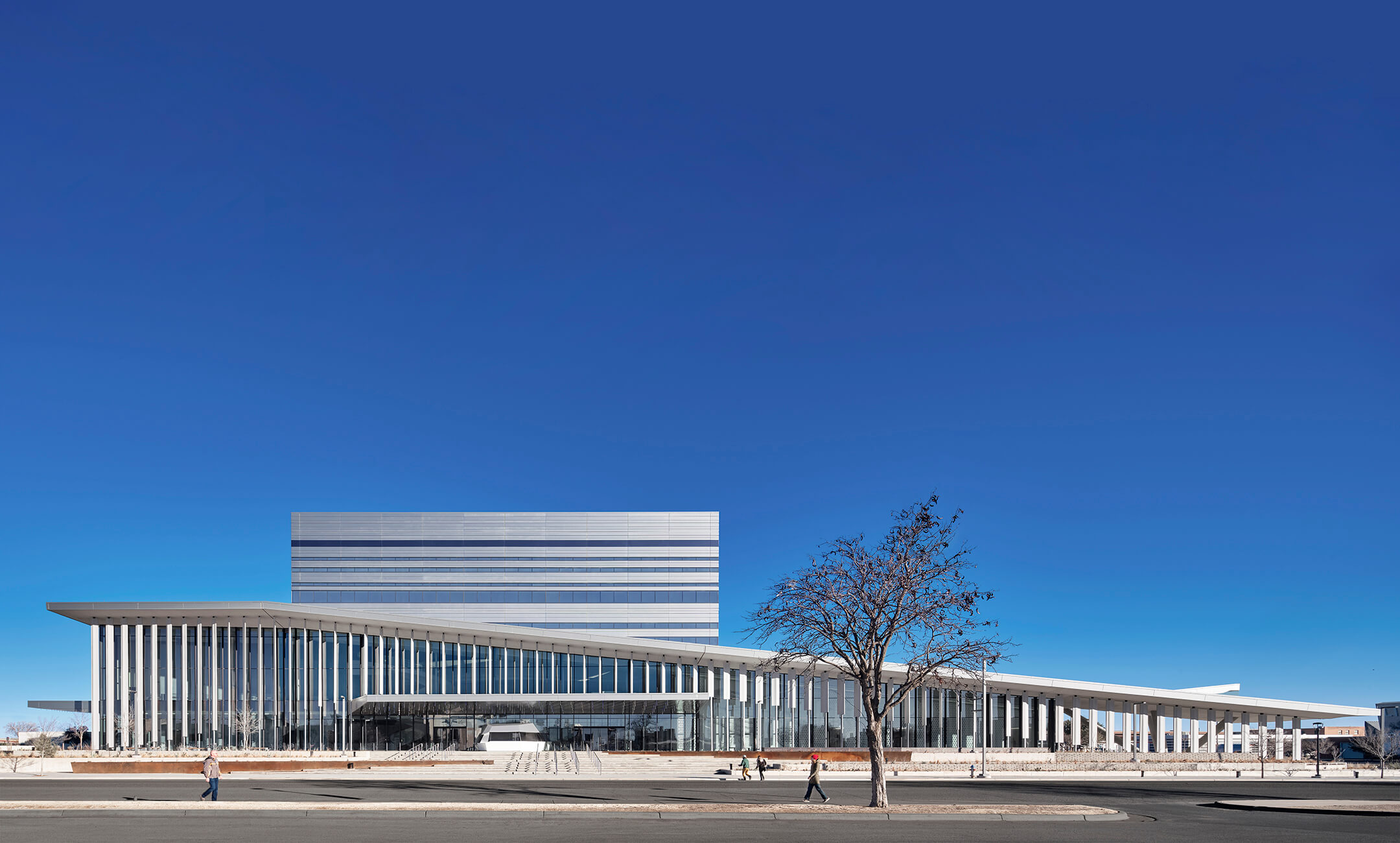 Lubbock, TX – The Buddy Holly Hall of Performing Arts and Sciences, a new state-of-the-art performance venue in Lubbock, Texas, recently inaugurated its landmark building with a series of socially-distanced, limited capacity performances. Designed by Diamond Schmitt in association with Parkhill and MWM Architects of Lubbock, built by Lee Lewis Construction, and developed by Garfield Public/Private LLC, The Buddy Holly Hall is now open to patrons and will formally celebrate its opening this summer. It is West Texas’ largest dedicated performance venue—bringing the city’s vibrant performing arts community including the Lubbock Symphony Orchestra, Ballet Lubbock, and the Lubbock Independent School District, along with a variety of professional touring productions, under one roof.

The new 218,000-square-foot Hall, which was developed to serve the community’s needs, anchors Lubbock’s arts and culture district and holds a multitude of performances and programs in the grand 2,297-seat Helen DeVitt Jones Theater, the more intimate 415-person Crickets Theater, and other flexible spaces for rehearsal and performance, as well as a restaurant, two multi-purpose rooms and an outdoor covered amphitheater.

“We are thrilled to finally begin welcoming audiences into The Buddy Holly Hall and to give the people of Lubbock and the region the state-of-the-art facilities our incredible performers deserve,” said Tim Collins, Chairman of the Board of the Lubbock Entertainment and Performing Arts Association which founded and operates the Hall. “Diamond Schmitt deeply understood our community’s dream to create a performing arts campus that promotes entertainment for our region, while also serving as an arts education hub and a cornerstone for downtown revitalization. The result is a beautiful, world-class space unlike anything in our area that will bring our community together and create a new destination for the arts in Lubbock. We can’t wait to celebrate this momentous occasion with a grand opening this summer, when it’s safer for everyone to gather together in person.”

Diamond Schmitt’s sophisticated design of the $158 million Hall was selected in 2014 following a competitive process. Their modern design is inspired by the colors and shapes of the landscape of West Texas, including the prismatic and layered rock formations of Texas canyons. The layout of the interior spaces will accommodate the Hall’s wide-ranging performance line-up—from hosting ballet, symphony, school, opera, pop and country performances to Broadway productions to statewide band and choir competitions. Targeting LEED Silver, the building’s façades meticulously balance various approaches to creating shade to counter the South Plains Region of Texas’ extreme temperature fluctuations. A long overhang, angled concrete fins, and deep-set ribbon windows all act as architectural drapery to cool the building and filter light without obstructing the views of the wide vistas surrounding the Hall.

Dissolving the threshold between indoors and outdoors, the Hall’s use of glass at ground-level entrances creates an inviting and seamless transition for visitors entering and exiting the Hall. Inside, the building moves from spacious public lobbies to more liminal spaces leading to several intimate studios and The Buddy Holly Hall’s two signature theaters, which were designed, in collaboration with partners Jaffe Holden Acoustics and Schuler Shook Theatre Planners, to ensure premier acoustics and optimal theater capabilities no matter the type of performance or sound level. Both theaters achieve pure and crystalline sound on par with the world’s leading performance halls through extensive acoustic modeling and precisely placed acoustical banners which enhance the clarity, consistency, and constancy of tone in the halls. Additionally, the seating in the Helen DeVitt Jones Theater can be reconfigured to accommodate the hall’s vast range of programming. The orchestra seating section can be set for traditional raked fixed-chair seating or for popular flat-floor general admission.

“Just as the idea for The Buddy Holly Hall grew from the Lubbock community, our modern design for the building is inspired by the region’s physical and cultural landscape,” said Matthew Lella, Principal at Diamond Schmitt. “We designed a building that is both open and outward looking and yet simultaneously invites the public to engage with all the activity happening inside. Responding to the unique challenges of the site—from the intense Texas heat to its location in a flood plain—we have created a signature new space for the performing arts with world-class facilities that embody the spirit of the performers who will be gracing its stages.”

The Hall is named for Lubbock native Buddy Holly, who sparked a cultural revolution in the 1950s with his music, songwriting, and big framed glasses. A signature feature of the Hall’s Christine DeVitt Main Lobby is its iconic guitar wall depicting Holly playing a Stratocaster. Designed by Texas artist Brad Oldham, the site-specific sculpture weaves together 9,000 aluminum brushed bronze guitar picks in an array of sizes to create an image of the Hall’s namesake.

The Buddy Holly Hall is privately funded, owned, and operated by the Lubbock Entertainment and Performing Arts Association (LEPAA), with 100% of all contributions directly funding construction of the project. Its initial feasibility study was conducted by Webb Management. Ongoing operations and event management will be facilitated through ASM Global. Innovative partnerships with local arts organizations, public schools and universities, and private corporations will allow The Buddy Holly Hall to be financially self-sustaining upon opening.

More information about upcoming programs and current health and safety protocols at The Buddy Holly Hall is available on their website at www.buddyhollyhall.com.

About Diamond Schmitt
Diamond Schmitt is a global architecture firm that designs transformative, purpose-driven, and highly sustainable buildings across sectors. Delivering innovative architecture that empowers people, communities, and organizations to harness change for the greater public good, Diamond Schmitt employs a collaborative research process to create bold designs renowned for their exceptional performance and meticulous craftsmanship. The firm has designed some of the world’s most iconic performance spaces in the world of music—including Mariinsky Theatre’s Mariinsky II in St. Petersburg, La Maison Symphonique de Montréal, and The National Arts Centre in Ottawa—all known for their flawless acoustics, versatility of space, and striking design. With offices in New York, Toronto, Vancouver, and Calgary, Diamond Schmitt is currently leading the design for New York Lincoln Center’s David Geffen Hall.

About ASM Global
ASM Global was formed in October 2019 from the merger of AEG Facilities, the global innovator in live entertainment venues, and SMG, the gold standard in event management. ASM Global is a venue management powerhouse that spans five continents, 14 countries and more than 300 of the world’s most prestigious arenas, stadiums, convention and exhibit centers, and performing arts venues. As the world’s most trusted venue manager, ASM Global provides venue strategy and management, sales, marketing, event booking and programming, construction and design consulting, and pre-opening services. Among the venues in our portfolio are landmark facilities such as McCormick Place & Soldier Field in Chicago, the Los Angeles Convention Center, Tele2 Arena in Stockholm, the Mercedes-Benz Superdome in New Orleans and the Shenzhen World Exhibition and Conference Centre in Shenzhen, China. ASM Global also offers food and beverage operations through its concessions and catering companies.

About Garfield Public/Private LLC
Garfield Public/Private LLC is a national development services provider focusing exclusively on public and public/private developments, including performing arts centers. The company uses innovative and cost-effective financing solutions tailored to the requirements of its clients. Garfield employs a “turnkey” delivery method that minimizes client risk and administrative burden, maximizes transparency and accountability, and enables “fast track” delivery of high quality facilities months or even years ahead of when otherwise thought possible. Garfield Public/Private and its executives have developed more than 20 million square feet of all property types nationally and abroad and have financed more than $7 billion in debt and equity. Its performing arts development experience also includes the Durham Performing Arts Center (DPAC) in Durham, NC and the George S. and Dolores Doré Eccles Theater in Salt Lake City, UT.