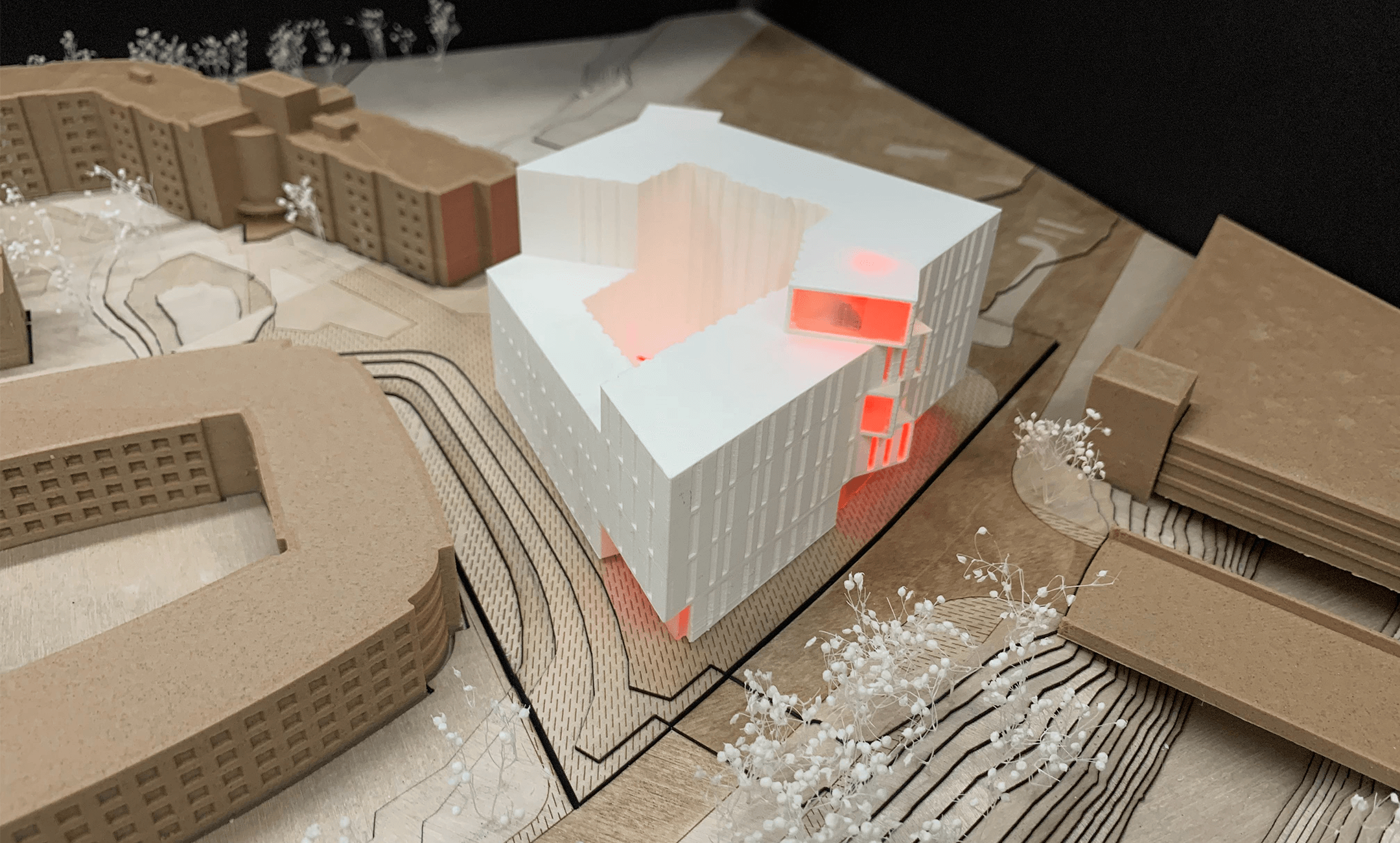 Light played a significant role in the design of the new student residence at Carleton University. Using visual analysis tools like Cove.tool and Ladybug, we analyzed sunlight hours and used the data collected to shape the building’s primary communal spaces—the Courtyard and Arcade—in a way that optimizes natural light contributing to a more vibrant social living environment.

In conceiving the new student residence, the client group at Carleton identified the need to include a courtyard that maximizes sunlight during active hours and offers a space where residents and the greater student population can gather, whether it be for study or leisure. In response, the design team proposed a building mass that is open to the south, forming a U-shaped plan. However, the client also had aspirations to create continuously looped corridors on each floor to foster a sense of community. The ideal solution for achieving this objective would be to follow a ring scheme, but that would result in a much more enclosed courtyard.

The design team turned to Ladybug – a sunlight analysis plug-in for Grasshopper – to evaluate the average amount of sunlight hitting the surfaces of the courtyard during active daylight hours throughout the year. Unsurprisingly, the U-shaped scheme and the ring scheme had contradictory results with the former option offering considerably more light into the courtyard than the ring-shaped massing. 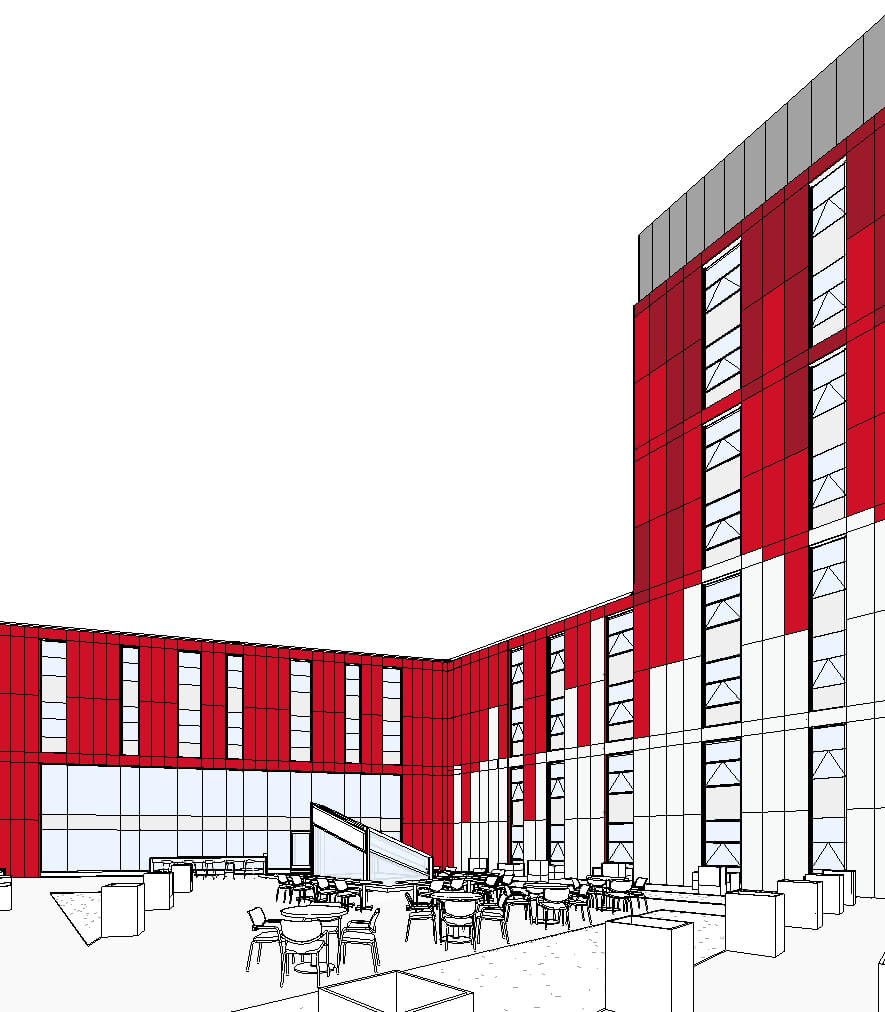 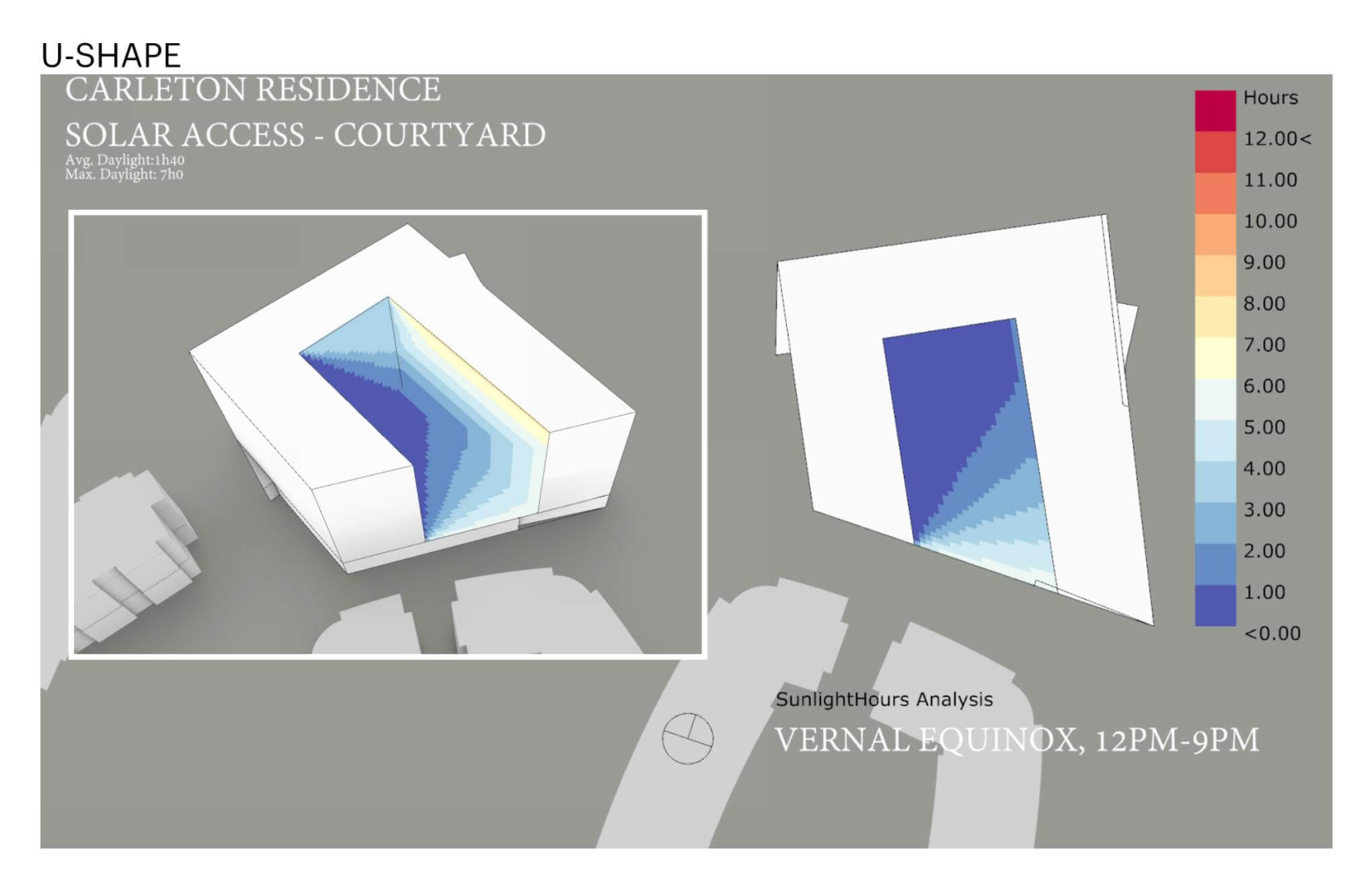 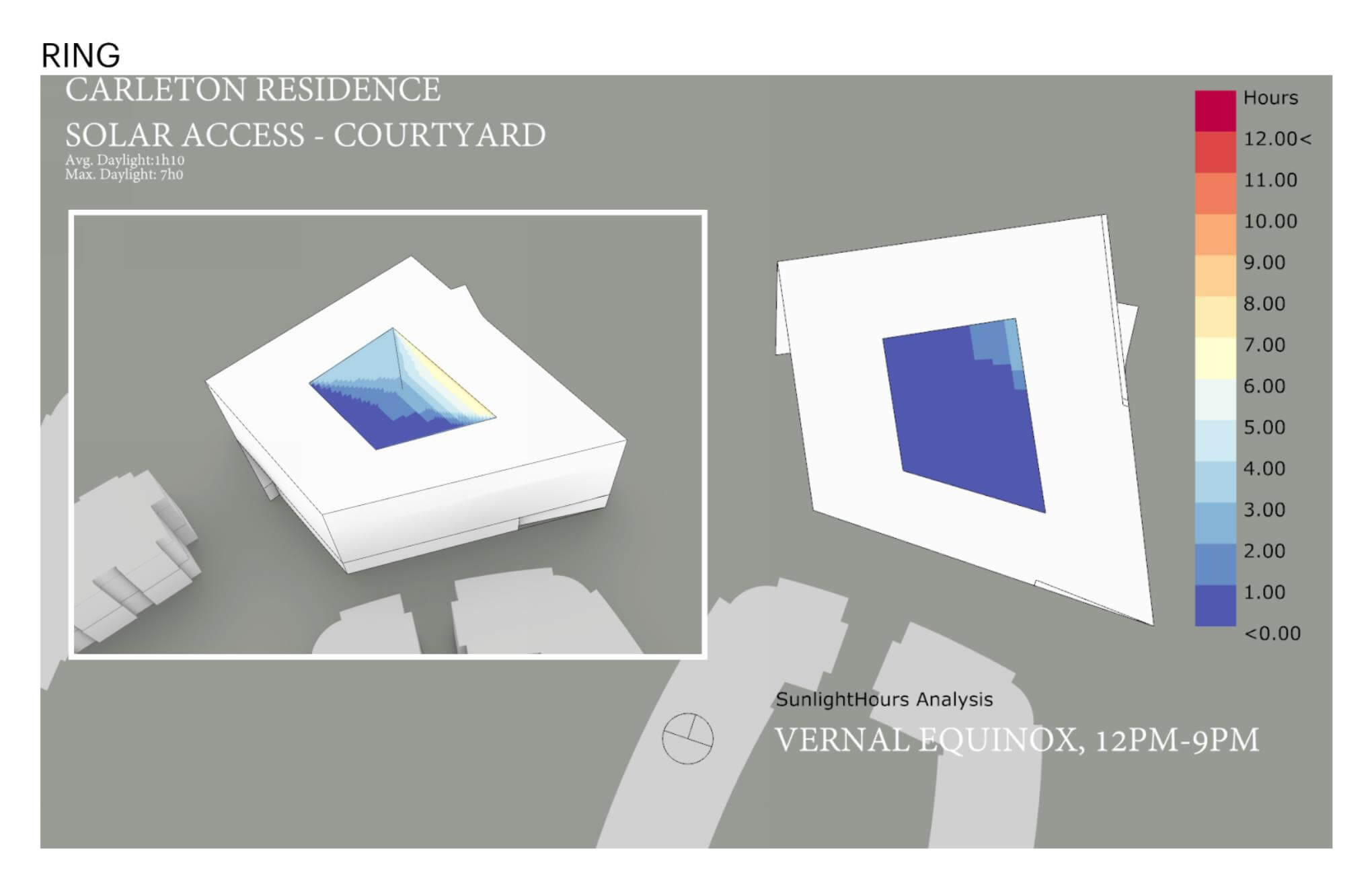 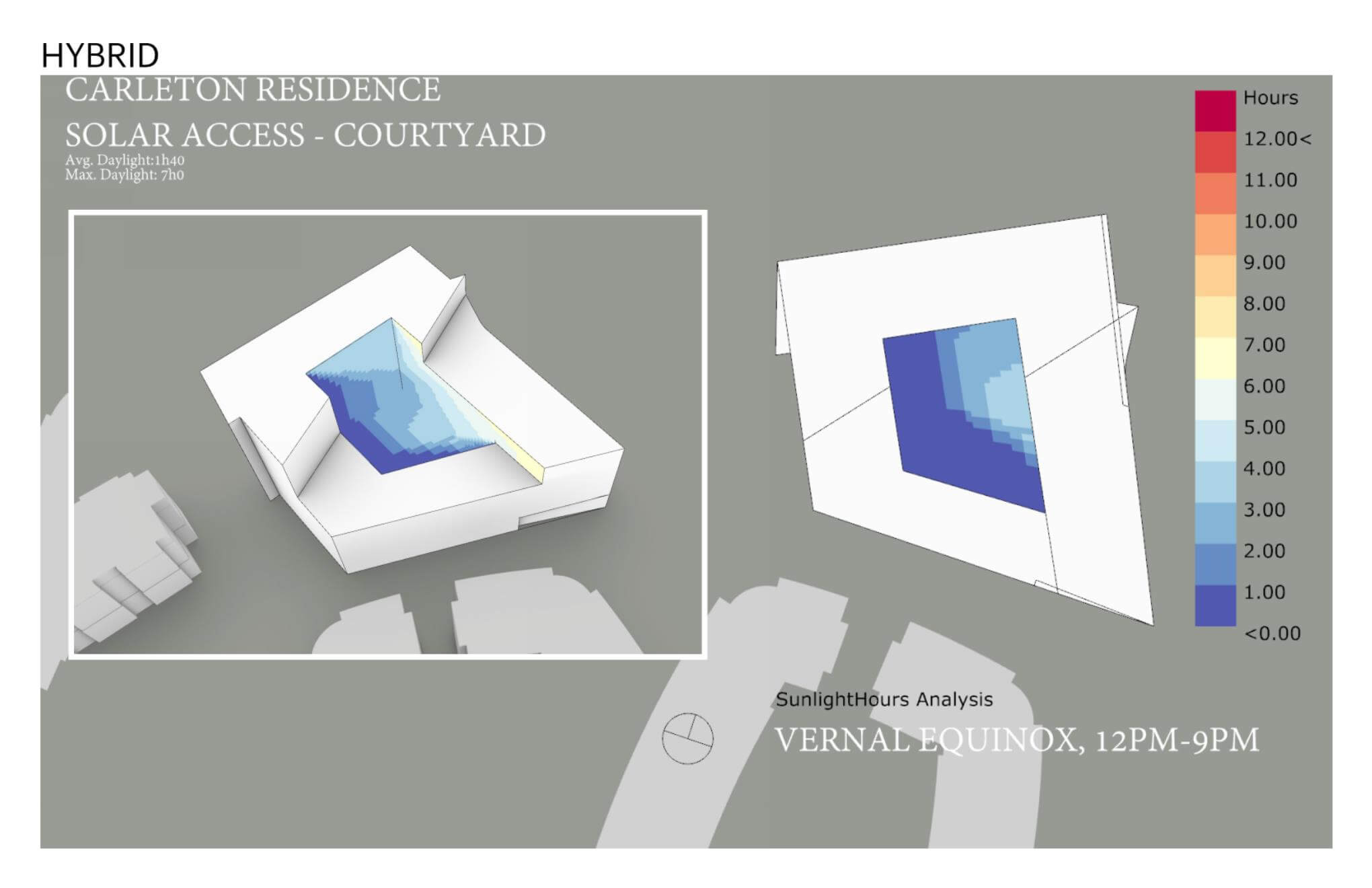 The team then wondered: is there a way to reconcile the two objectives and create a design option that maintains some of the looped corridors while providing significant sunlight in the courtyard?

Through all the explorations we conducted, the visual analysis and interactive metrics of Ladybug, which included radiation studies, sunpath graphics and modelling of daylight hours, confidently led us toward a hybrid option.

The resulting design maintains continuous corridors on four of the eight residence floors, with several of the upper levels articulated by a U-shaped configuration. This massing sees the south elevation scaled down, subsequently increasing solar access to the courtyard and admitting substantial levels of sunlight into the space. The outcome is a more unique architectural form that not only augments the courtyard’s exposure to sunlight, but creates terraces, increasing opportunities to access the outdoors at upper levels.

At ground level the new residence is open for all campus students. The student experience is defined by a central Arcade that acts as a hub surrounded by student amenities such as a communal kitchen, fitness centre, maker space, gym, games room, theatre, study spaces, laundry facility, and contemplation room. This glazed galleria establishes a strong pedestrian passage through the residence from east to west, not only allowing light into the interior, but also drawing passersby into the building—acting as a link between the public and student life.

Due to the location of existing roads and pathways bordering the site perimeter of the new residence, the shape of the ground floor resulted in a deep polygonal footprint. The design team employed Cove.tool to evaluate the amount of sunlight reaching interior spaces and determine how to optimize natural light within the Arcade. The data collected from the digital model helped the team communicate to the client group the need for sunlight deep in the floor plate. 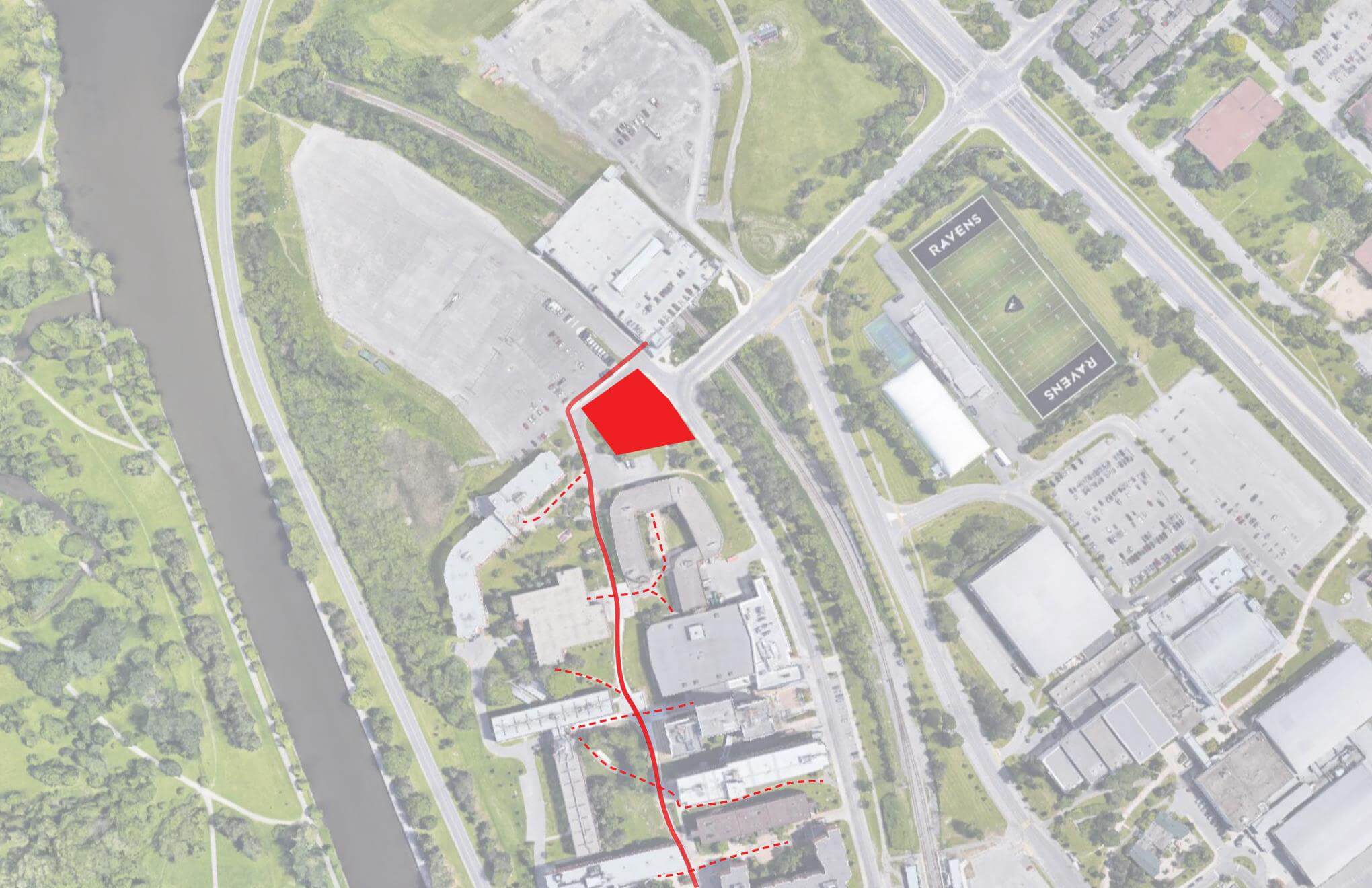 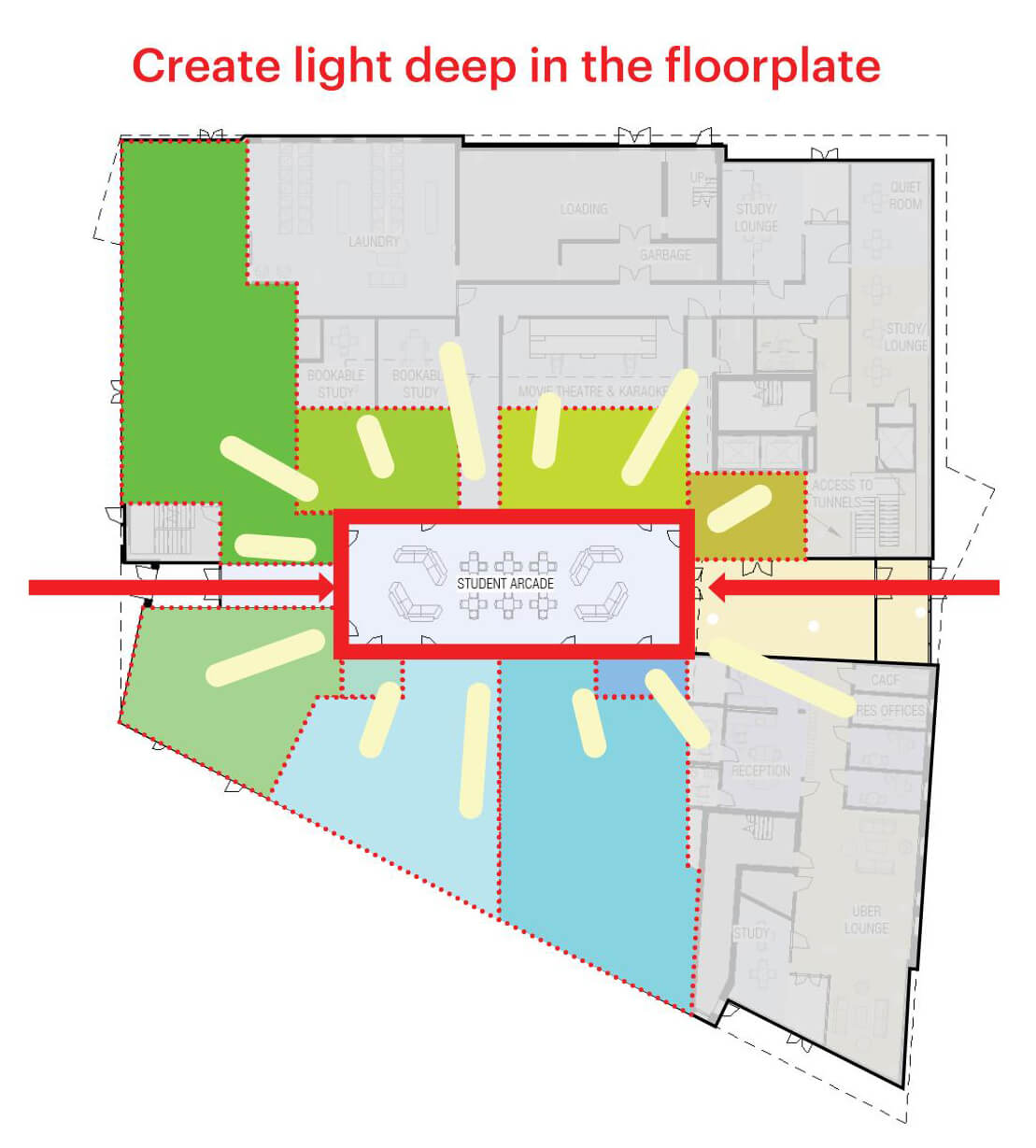 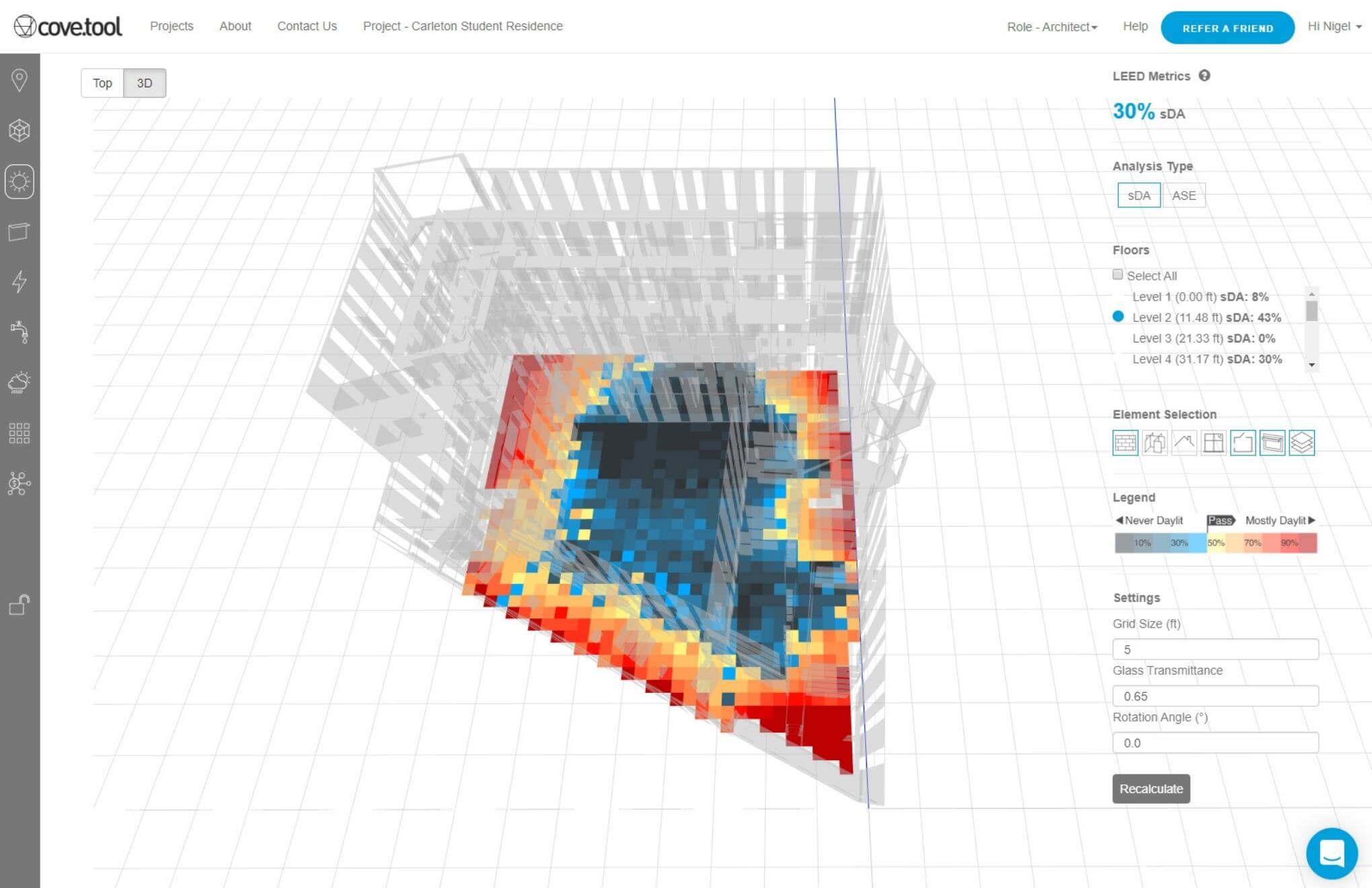 As a result of the close collaboration with the construction manager and the client, the team realized the dual potential in the slab opening created for the crane tower located at the centre of the Arcade – where natural light is most lacking. Instead of filling the opening with concrete after the crane is dismantled, the team decided to make a virtue of that necessity. The slab opening at the centre of the courtyard floorplate presented the opportunity, with one intervention, to create both a skylight for the Arcade at grade and a crystalline focal point for the courtyard above.

Consequently the Arcade ceiling was then shaped from a flat surface to four angled surfaces which collectively act as a light funnel. The added height created by the tilted planes also gives a sense of levity and spaciousness. With the aid of these tools, a more dynamic and identifiable ceiling space is expressed, emphasized by the amount natural light now cascading into the Arcade.

The design of the new student residence at Carleton demonstrates how plug-ins like Ladybug and Cove-tool can be used to make more considered design decisions. Using visual analysis tools, not only can the metrics and data be easily understood to inform the team’s design decisions, but communication with clients and collaborators is simplified. The modelling provided has allowed us to develop a scheme that not only effectively responds to the client’s specific spatial ambitions, but also enhances the overall well-being of its student population through  thoughtful and efficient design.