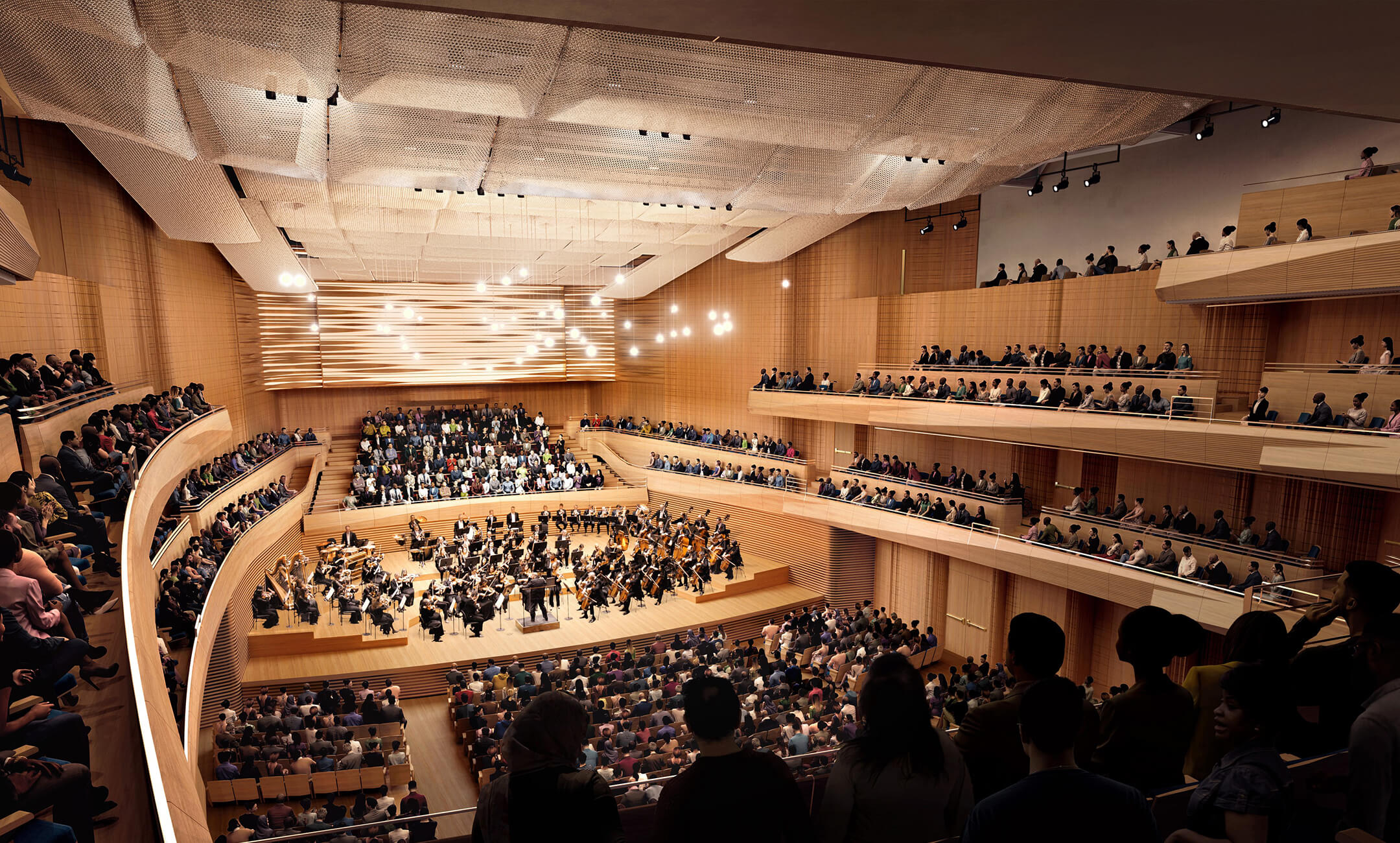 (New York, NY — Dec. 2, 2019) Henry Timms, President and CEO of Lincoln Center, and Deborah Borda, President and CEO of the New York Philharmonic, today unveiled plans for the reimagination of David Geffen Hall. The project will transform the concert hall and all public spaces, enhancing the concertgoing experience, fostering a sense of community, and creating bold and innovative ways to connect with the world outside.

Working in Concert, Lincoln Center and the New York Philharmonic have engaged a team of preeminent architectural design firms and theater experts to spearhead the $550 million project, of which $360 million — two-thirds of the construction budget — has already been raised.

Diamond Schmitt Architects, led by Gary McCluskie, will design the concert hall. New to the architectural team is Tod Williams Billie Tsien Architects │ Partners, winners of the prestigious 2019 Praemium Imperiale prize, who will design all of the public spaces. They join acoustician Paul Scarbrough of Akustiks and theater designer Joshua Dachs of Fisher Dachs Associates.

The team will create a more intimate performance venue with state-of-the-art acoustics and artistic flexibility to present orchestra concerts, solo performances, multimedia presentations, and movie screenings. With the rebuilt concert hall at the building’s heart, all public spaces will be reconceived to provide better opportunities for people to gather and connect.

The new concert hall introduces a “single-room” concept, eliminating the proscenium and moving the stage forward by 25 feet, with audience seating wrapped around it, bringing all seats closer to the performers and providing acoustical and visual intimacy. The new Hall will be a highly flexible space with variable stage configurations designed to support a wide range of performance initiatives. Natural wood and curvilinear forms create an immersive experience that transforms the room into a contemporary, sculpted design. Seating capacity will be reduced by 500 seats to 2,200, and a steeper rake (incline) will be added to the orchestra level, significantly improving acoustics and sightlines. The Hall will also have improved ADA accessibility.

Deborah Borda said: “As a veteran of two major concert hall projects, I can say that the clear goals, the rigorous planning, and the actual design for the new David Geffen Hall give me confidence that this will be a singular success. The partnership we have formed with Lincoln Center is very real and very critical to all that is occurring. At long last, David Geffen Hall will be a superb and connected musical venue.”

David Geffen Hall’s main lobby will double in size and open up on three sides to connect with the campus; a new Welcome Center on Broadway will offer a portal to Lincoln Center for the public; Union Square Hospitality Group is serving as consultants for food and beverage planning in the new David Geffen Hall, which will include a destination eatery for informal and casual dining, to be opened throughout the day and after concerts. At the core of the new lobby will be a media streaming wall, which can show concerts and events in real time as well as other digital formats. The reconfigured and reenergized Grand Promenade will create one of the largest spaces for entertaining at a performance facility in New York City, welcoming over 1,000 people for an event. During performances, there will be expanded intermission seating and bar/food service, including enhanced access to the terrace and new promontories overlooking the main level.

A dynamic new addition is The Sidewalk Studio, visible from the street on the corner of 65th Street and Broadway, which will be a home for educational, artistic, and community activities — a window into the performers and ideas that live on campus. The Lightwall will wrap around three sides of the interior top of the building, creating space for dynamic mood and architectural lighting. Eleven thousand square feet of much-needed office space will be located behind the Lightwall. The entire North Façade of the building will be reimagined as a “canvas” on which to commission site-specific works, honoring Lincoln Center’s long tradition in the visual arts. All of this will be accomplished while respecting the original and iconic Max Abramovitz building exterior.

“This project is all about greater connections,” said Henry Timms. “The new concert hall will unite performers and audiences; the dynamic public spaces will allow our communities — from visiting schools to concertgoers wanting to stay for a drink — to connect with each other. And the whole project re-sets how we engage with the outside world.”

The new Hall will open in March 2024, with two short closings: the first closing will be May 2022 through October 2022; the second closing will be May 2023 through February 2024, with the New York Philharmonic performing in other venues in New York City, including Carnegie Hall and New York City Center. During the summers of 2022 and 2023, Lincoln Center’s Mostly Mozart Festival will be presented throughout the Lincoln Center campus.

Henry Timms and Deborah Borda said: “This project is a commitment to our community, to the arts, and to New York. It has been inspiring to see our teams, our boards, and such a talented group of professionals come together to get us to this important milestone. We look forward to the next steps on our journey.”